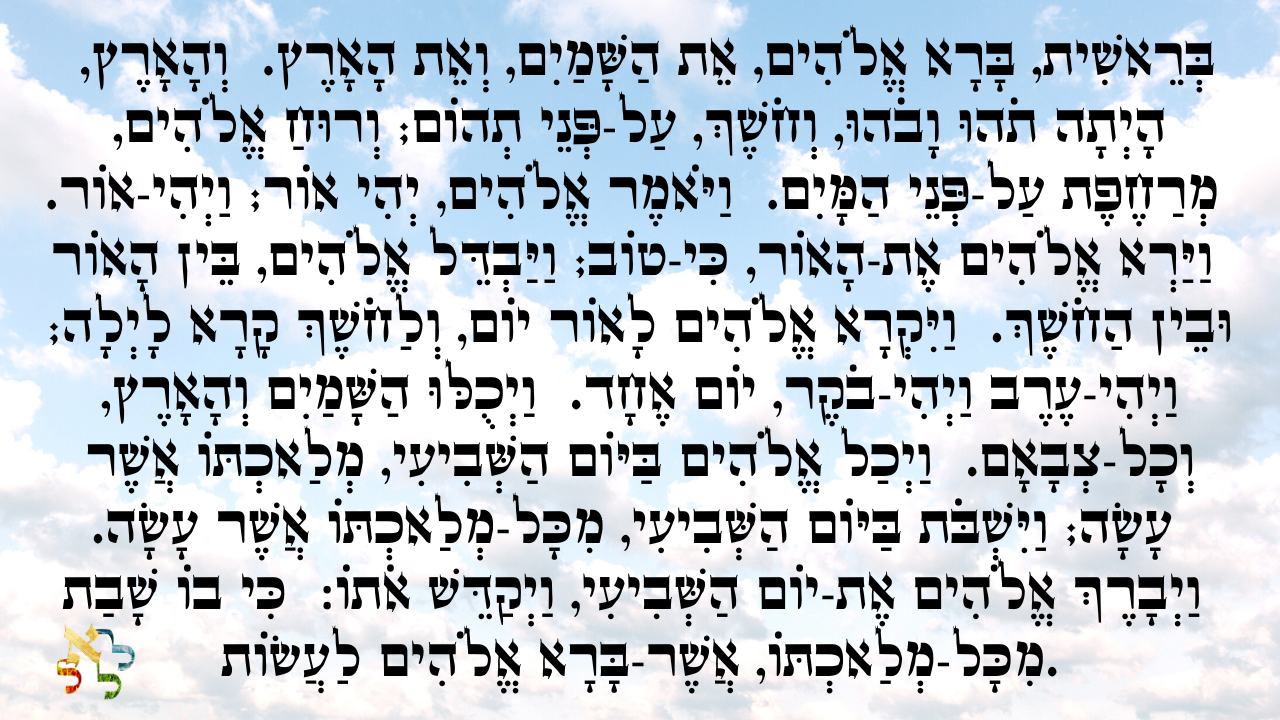 The Kabbalist Rabbi Yaakov Ades Requested everyone to say the segulah of the 8 pesukim each morning.

Because of the pandemic, there is a possibility that the situation will worsen so the Kabbalist Rabbi Yaakov Ades shlita has revealed to us this segulah. Everyone should say every morning all 8 pesukim like they are written in Parshat Bereshit.  This 8 pesukim is a segulah to increase the awareness and glory of Hashem & to reveal His kingdom in this world, May it be His will that we hear good tidings soon!

the pesukim are as follows: 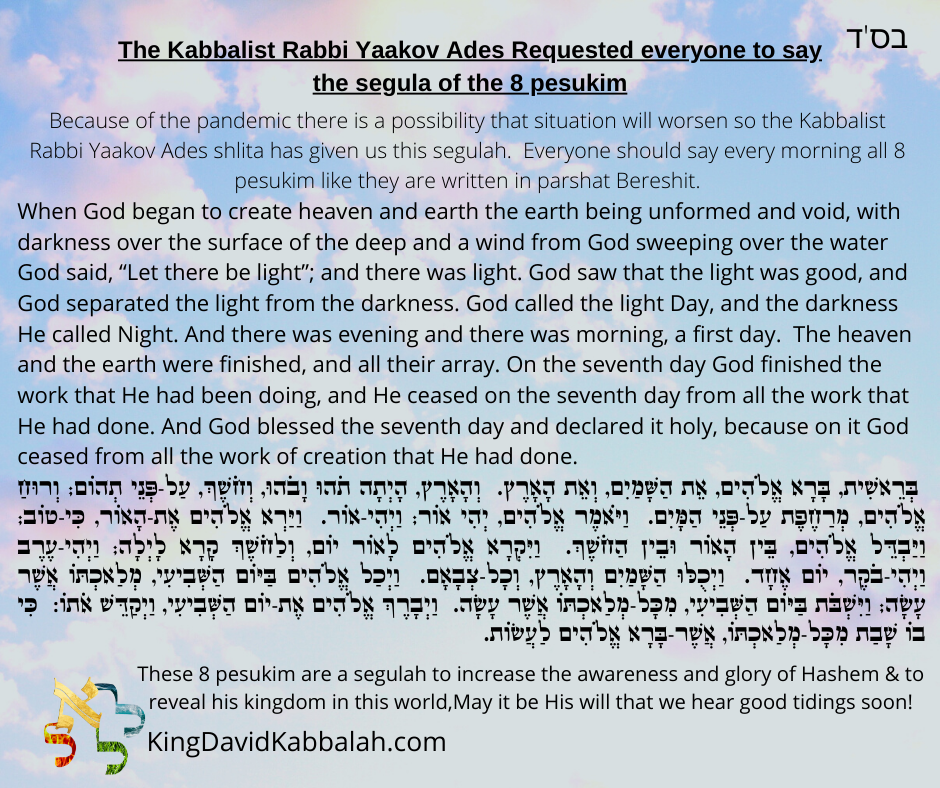 The Ohr Hachaim Hakadosh whose Yartzite it is today, tet zien Tamuz, perush on some of this pasuk “ויכלו השמים והארץ. Heaven and earth were completed.  Hashem is the מקומו של עולם, Hashem is the place of His universe (and not vice versa). We also find statements to the effect that Hashem fills the universe, such as Isaiah 6;3: “The whole earth is full of His glory.” Hashem’s light surrounds the entire globe and it fills the globe itself.  I have heard from Torah scholars (who were my teachers) that the reason Hashem made the earth spherical is to enable its various parts to endure with equal ease. The rabbis meant that of all the desires, urges and feelings of love in the universe nothing matches in intensity the urge of the spirit which has recognized the light of Hashem and its desire to cleave to Hashem’s light.

Every living soul which has been fortunate enough to recognize even a small amount of that light longs to behold visions of the pleasantness that is Hashem. Know that Hashem has endowed each category of His creatures with a two-tiered intelligence. One tier is the power to perceive, the other tier is the power to analyze. Human beings, i.e. creatures who are endowed with the power of speech, as well as all lower forms of life or even the inert part of nature, all received a degree of intelligence commensurate with their status in the universe which enables them to recognize their Creator. By means of this intelligence, we know that the globe continues to exist without faltering. Hashem has revealed some of this secret to those who revere Him and by means of these explanations, these facts became translated to our senses.

The force holding up the globe is Hashem’s beautiful and all-embracing light that surrounds the globe in equal measure. Every section of the revolving earth derives additional strength from the power of the fiery urge that burns within it urging it to cling to the manifestations of Hashem’s spirit. This is why the globe remains in its position in the universe.  (translation from sefaria)

this one is in Spanish 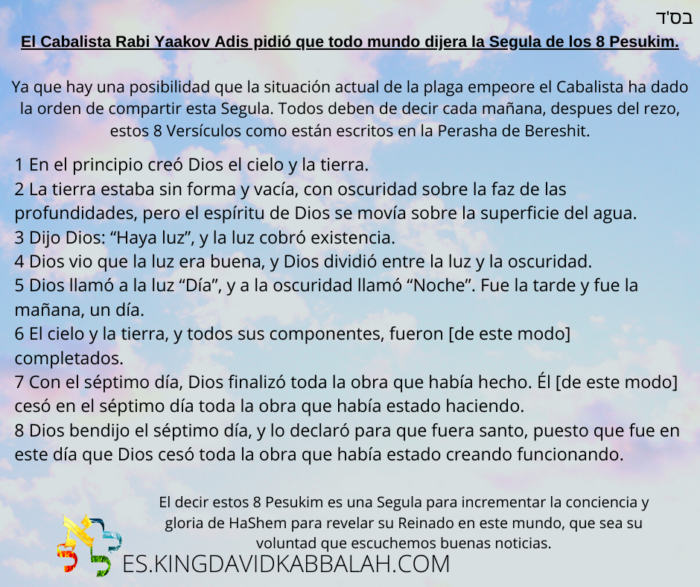 and this one in Hebrew 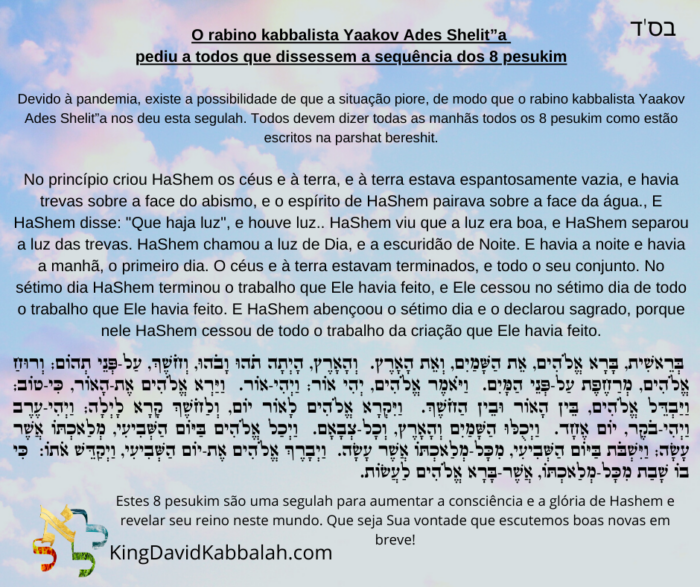 The Kabbalist Rabbi Shemueli said today that A big black cloud covers and gets big to cover the light, our weapon against it is to stand in front and stop it.  Many of the physical things we are regular to have been put in danger, many governments want to stop being democratic and kill religion the only secret weapon we have is our connection with Hashem. Only Truth that there is nothing else besides Hashem Ein Od Milvado, we are the only ones who can use this weapon, and if heaven forbid we do not use it the world as we know it will be gone, destroyed. this can save all the neshamas all the holy souls that have been put into this world, by simply connecting to Hashem to know that there is nothing else besides him to live in holiness listening to the will of Hashem according to the Torah. The Love between us and Hashem is something that will last forever, that is completely spiritual, how much more we connect to him the fewer chances that the prophecy of the 2/3rds will happen.

for the refua of Rabbi Raphael Benya Ben Shifra 57 only without background disease.