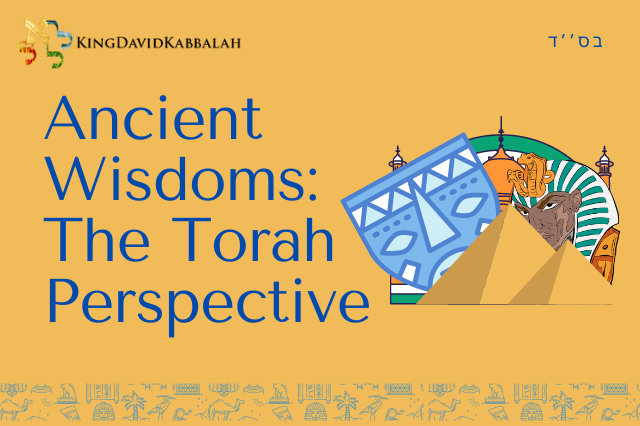 As time passes scientists have managed to know more about ancient cultures. The archaeological findings all around the globe have amazed humanity with the wisdom ancient civilizations used to have. Wisdom of any kind, from architecture to spiritual wisdom. The pyramids for starters, are a magnificent example of how the Egyptians would be at the forefront in architecture and in astronomy. The real question here is: How is all this connected to Torah?

The introduction to the Torah of the Rambam holds that all of the wisdoms of the world have their origin in the Torah. The challenge is to find the connection between something “secular” and the Torah. There is a concept that within a big lie it lies a truth otherwise they would fall down. The ancient spiritual wisdom and also nowadays come from concepts taken out from the Torah.

Some wisdoms may be very interesting and attractive. Therefore, the jew must first strengthen his faith and knowledge in judaism before diving into new “wisdoms”. Many times it is very easy to find any connection to any happening with the Torah being it truth or not. For example the recent finding in Ethiopia of symbols engraved in the Tiya stones.

On the Tiya stones it can be seen a set of hands that can be interpreted as Hashem’s hands or some superiority. The versatility of interpretation of these findings and wisdoms is what usually ends up in idol worshipping. Nowadays, there are all kind of cults that try to make a connecting between ancient wisdom, Torah and Kabbalah. Not to go far the Islam and Christianity were both taken out from the Torah. Since there is truth within their lies it could get confusing to refute or even to negate.

The question is why would someone be tempted to go search for truth elsewhere? This is why the goal ofKing David Kabbalah is to spread the truth all over the world and give people the oportunity to come closer to the only truth, to Hashem.