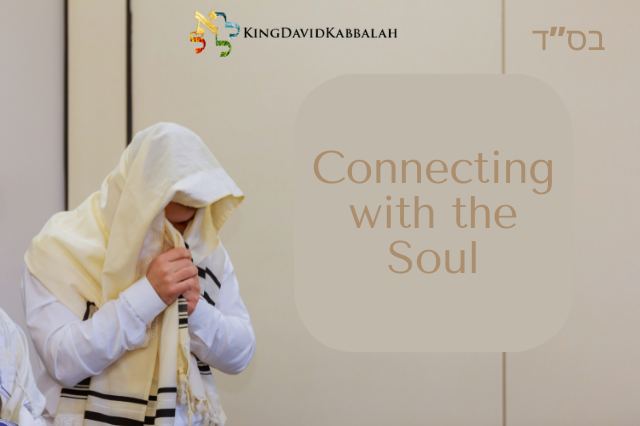 Connecting with the Soul

In parashat Vayechi Yakov Avinu is about to leave this world he called Yosef.

And when the time approached for Israel to die, he summoned his son Joseph

The Zohar asks why he called only Yosef. The answer is that Yosef was more of his son than the other brothers. There was a special connection between the soul of Yakov Avinu and Yosef’s soul. The Zohar explains that when Yosef had the test with Potiphar’s wife, the verse states:

He came into the house to do his work. None of the household being there inside. (Genesis 39:11)

The meaning of  no-one being there from the people of the house is that there was no-one from the house but there was something else. According to the Zohar there was דיוקנא דיעקב (diukana d’Yakov). The simple meaning of דיוקנא דיעקב is picture or image of the face of Yakov. When Yosef was in the middle of his test, he looked up and saw דיוקנא דיעקב which gave him strength to overcome the test. The idea of דיוקנא דיעקב is not that Yosef had a picture of his dad in his wallet. The deeper understanding is that there is certain distance between the spiritual dimensions. Yosef, because of his holiness, had certain level of prophecy, so as Yakov Avinu.

Yakov Avinu did not know that Yosef was still alive but there is a concept in the Gemara: “even though a person doesn’t see something his mazal does see”. Rashi explains that the Gemara means soul by saying mazal. The neshama of Yakov was in touch with the neshama of Yosef, since there was not permission for Yakov to know about Yosef it did not get tangible for him. But for Yosef, since it was needed for him to pass the tes, he was able to connect with Yakov’s soul at a more tangible level.

Yosef and Yakov had a special connection and Yakov want it to make it more tangible. This is the reason why the children of Yosef became to be as sons of Yakov. The apparent issue is that there are supposedly 12 tribes but if the substitution of Yosef by Efraim and Menashe is done there are left 13 tribes. The way the tribes were ordered when they left Egypt was that  the 12 tribes were surrounding the Machane HaShechinah. But, the Levi tribe was at the middle of the camp, where the Machane HaShchina is, so Levi is not counted within the 12 tribes.

If Menashe and Efraim are counted then Levi does not count. If Levi is counted then Menashe and Efraim are counted as one, meaning Yosef. The concept of 12 that are 13 is repetitive through out the kabbalistic knowledge. As opposed to other believes; for judaism, te number 13 is a number that symbolizes positive things. The principle of the 12 included within the 13 is connected to the special blessing that Efraim got for continuing the lineage: Abraham, Yitzchak, Yakov and with Reuben loosing his firstborn rights went to Yosef and eventually it went to Efraim. It is found throughout the Zohar that the Mashiach is called “Mashiach ben Efraim”, the whole jewish people is also, sometimes, called Efraim.

* All of the Torah verses were obtained from sefaria.org