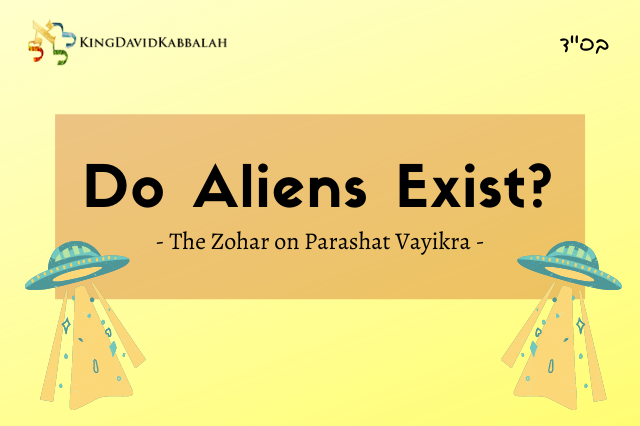 The Zohar in Parashat Vayikra brings a wonderful opportunity to answer a popular question. Many people ask about aliens. They are very fascinated about aliens. Are they real? It is known that Hashem created the creation according to the concept of 7. There are 7 days,7 weeks (Sefirat HaOmer), 7 years (Shmitah), 7 heavens, 7 lands, 7 rivers and the 7 thousand years of the creation. Within the 7 heavens there is the Mazal which is also called Zodiac. People usually translate it as luck but the correct translation would be a flow from above downwards. The Zohar elucidates that there are Angels operating these levels. The purpose of all this structure is to connect to the Creator.

The Zohar continues explaining that the 7 heavens have a correlation with the 7 lands. They go as pairs in the form of onion layers. The Zohar concludes that above and beneath this structure there is Gan Eden and there is Gehinom respectively. Between all these levels, the Zohar says, there are all kind of creatures. The question is: where are these creatures coming from? The Zohar answers that they all come from Adam HaRishon. In his exile from Gan Eden he went all over all the structures and had offspring.

There is kind of a secret book that the Zohar quotes: “Sifra dRab Hamnuna Saba”. In this book it says that the world is round like a ball. And there are creations on within, on top and at the bottom that are erect as humans. The Zohar continues on the same line talking about the ocean. As we mentioned before, there are also 7 oceans and different creatures that inhabit this structures. Is someone wants to tie aliens to a Torah concept this is a good start.

The creation is much more complex than we usually think. Humans need to be aware of all creations and have to learn how to interact with these different “species”. This is the reason why the jewish people focus on learning Torah. So that we can learn how to interact with them in order to connect with Hashem. Always the goal is to come closer to Hashem.