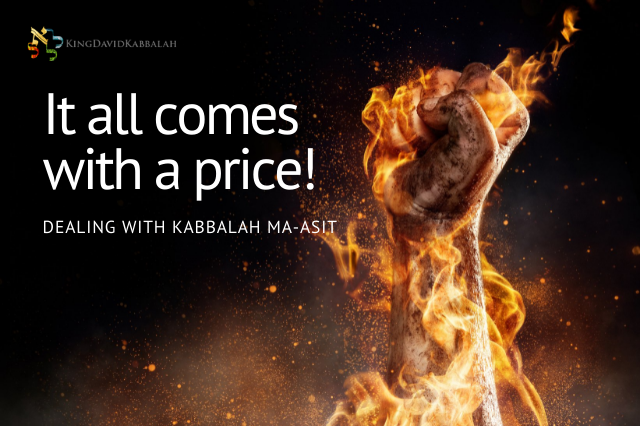 It All Comes With a Price!

The esoteric side of the Torah is becoming more popular among the Jewish nation and even within the gentiles. An important topic within the Kabbalah is Angels. It is of big interest all about the connection between human and angels and the power one might have over the other. At the beginning of  parashat Vayishlach there is an episode where there is explicit use of Kabbalah Ma-asit.
Yakov Avinu sends angels to meet Esav.

Jacob sent messengers(angels) ahead to his brother Esau in the land of Seir, the country of Edom. (Genesis 32:4)*

In the narrative of the Torah it seems like a normal, not outstanding thing to do. Through the generations there are known rabbis that have commanded angels to do certain task, usually this activity is one done in times of emergency. Nowadays the question arises: Is it still possible? The answer is yes.

Although humans have the power of commanding angels to do certain tasks, it is not as simple as it sounds. When dealing with Kabbalah Ma-asit it always comes with a price. As a parable, when a person wants to acquire a product at a store, a price has to be paid; so it is with Kabbalah Ma-asit. The big issue with Kabbalah Ma-asit is that the price is unknown, there have been people that dealt with it and regretted at the very end; it was simply not worthy. **

The Arizal was very straightforward about dealing with Kabbalah Ma-asit, he simply said it was forbidden, even more so for egocentric and for a personal agenda. There is an exception, as mentioned above, when Am Israel is in danger or there is a big threat to the community; even on those cases only big rabbis are able to do it. One of the latest examples of known rabbis dealing with Kabbalah Ma-asit was Rabbi Yehuda Petayah, he was in a very high level which allowed him to speak to the neshamot, angels and all body-less beings. But, for most of the people it is not recommended.

One might ask, if it is that dangerous, to deal with angels, then why Yakov did it? The Arizal answers that people throughout the generations that dealt with angels (even more so Yakov Avinu) where in such a pure state of being that cannnot be grasped by the simple mind. If the Arizal’s answer is not satisfying, it could be seen that right after Yakov sent the angels to Esav, he had the fight with the angel; so, it is proof that it always comes with a price.

**In King David Kabbalah we warn people to be very careful on which books they are reading and which leaders they are following. Always make sure it comes from a kosher source, if you have doubts please contact us.