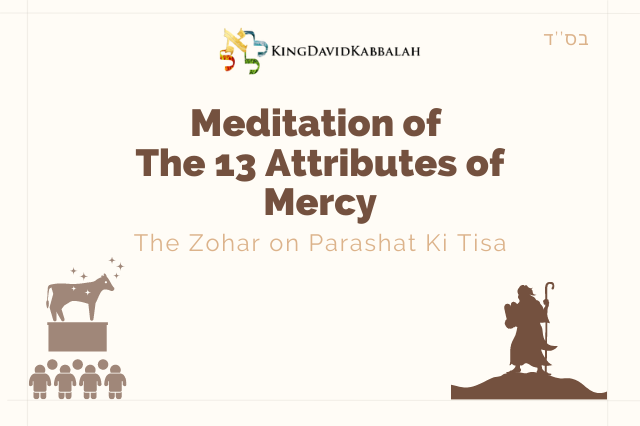 Meditation of The 13 Attributes of Mercy

Parashat Ki Tisa narrates the episode of the sin of the golden calf. This event was the biggest fall of the Jewish people from the highest of levels. They were at a level where they were able to receive the Torah directly from Hashem. On the other hand, this huge sin served as a pathway for Hashem to reveal His attributes. The 13 Attributes are, nowadays, part of the regular jewish life. The attributes are recited at least once a day at the morning prayer. The are a direct way for coming closer to Hashem.

At the moment of the revelation of the 13 attributes, Hashem was teaching Moshe the correct way to pray. He told Moshe: the first thing to do is to to properly use the merit of the Forefathers. Moshe then asked: what if the sin is too big for the merits of our Forefathers to help? Since he was just coming from the event of the golden calf. Hashem then responded: I will give you my 13 attributes. The 13 attributes do not have an end to their potential. They are such a powerful tool that one can achieve high spiritual levels through the proper meditations.

According to the Drash, the 13 attributes start with Hashem-Hashem because there is Hashem before the sin and Hashem after the sin. Humans are not capable to damage whatsoever the essence of Hashem. He is above and beyond everything. No matter how serious the sin is, it does not affect Hashem in anyway. So, He is mercifully giving the opportunity for us to do tikun for our sins and to amend the damage we did to ourselves. We are the only ones that loose when sinning.

When a person is reciting the 13 attributes, he should have in mind: This code of words allows me to connect myself to the highest parts of my spiritual being. The person needs to meditate on drawing down abundance until the last attribute: “V’nake”. The end of the process is when Malchut is reached. Malchut serves as a recipient for all of the abundance.When a person reached this point, he should have in mind to be cleaned from all of the negative sparks; since v’nake means to clean.

This is a great opportunity to learn how to clean our minds from bad thoughts, negative energies and negative memories that prevent us from moving on.