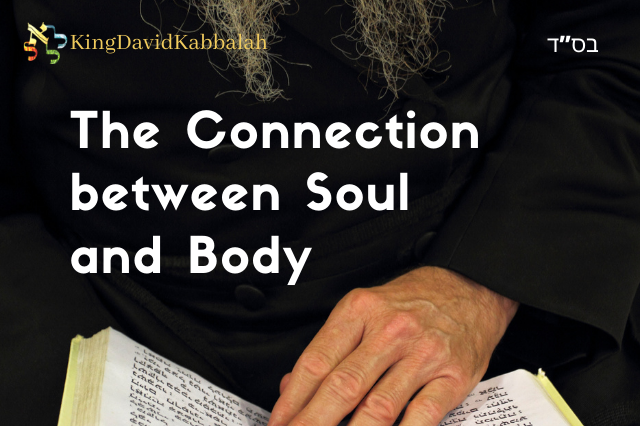 Don't wan to read it? Follow our weekly podcast

The Connection between Sould and Body

The Zohar in Parashat Shemot talks about the verse:

The simple understanding is that the pasuk is talking about Amram, Moshe Rabenu’s father. The Zohar hints that the verse also refers to Gabriel. The Holy Zohar explains that whenever the Torah says the word אִ֖ישׁ (man), it hints to Gabriel. The verse in Daniel proofs that Gabriel is referred as אִ֖ישׁ:

The man Gabriel, whom I had previously seen in the vision (Daniel 9:21)

… and married a Levite woman.

The meaning of  a Levite woman, the Zohar explains, is the neshama(soul). To sum up, Gabriel, with the quality of the Shechina, comes and takes the Neshama. The Zohar says that Hashem calls Gabriel when He need the soul of a righteous person. The Angel Gabriel takes the Neshama from Gan Eden and places into a body. The neshama of all of the Tzadikim (righteous people) went through this process done by the Angel Gabriel.

There is a contradiction since it says elsewhere, in the Zohar,  that a different angel, called Lailah, is in charge of the conception and pregnancies.  Furthermore, The Zohar conciliates that there isn’t a contradiction. Both, Gabriel and Lailah, interact within different aspects in the process.

The way a jewish marriage interacts when they come together has a direct effect on bringing faster the redemption. The marital relationship should be done in a holy and pure way so that the effect will help to bring the redemption faster. The jewish man needs to careful not to fall in a forbidden relationship. Also, when the man is with his wife, they need to be careful to follow the laws of Taharat HaMishpacha (Family’s purity jewish laws). As much as a jewish couple are sanctifying themselves, they awake levels of holiness from above that will ultimately push the redemption.

The period of time between the Parashat Shemot to Parashat Mishpatim is known as the acronym Shovavim. This is an auspicious time to repent and make tikun for sexual sins. When a person act wrongly is as if he took his neshama and throw it away from the kedusha(holiness). The tikun is the process of picking up the neshama and reconnect it to the light of Hashem. When part of the neshama is not where is supposed to be, the person looses abundance that Hashem wants to give him, but the conduit is not complete for the abundance to pass.

The objective is to reconnect to the realms of kedusha, taking advantage of the days of shovavim.

* All of the Torah verses were obtained from sefaria.org