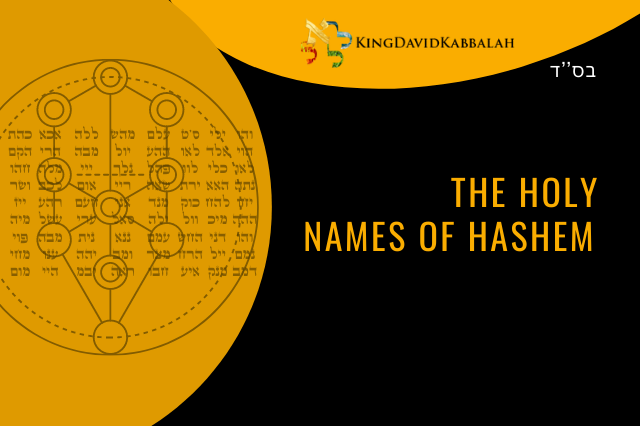 The Holy Names of Hashem

In parashat Tetzave the Zohar talks about the different Holy Names. This names have different purposes such as meditations. Two of the most famous set of names are the 72 Names of God and the 42 letter name of Hashem. In  the Torah, the Zohar explains, there are times that one letter is written bigger than the rest of the others. This can be seen in the verse of the Shema Israel where the Ayin is bigger so does the final Dalet. The Zohar is comparing this phenomenon with the different types and purposes of the Names of Hashem.

There are three levels of the Holy Names. The highest level of Names are so strong that just by meditating on them, they get activated and fulfill their purpose. The middle level is composed by the names that in order to be activated, the person needs to say the name out loud. To use the power of speech. The lower set of names are also related to the negative side. These names can be activated through an act. This is what is called Kabbalah Ma’asit.

The Kabbalah Ma’asit is forbidden according to the Arizal but there were other trends of Kabbalah that did allow these type of acts. If there is not a proper guide and use of this Names, it could easily end u in what is know as witchcraft. Even though the Kabbala Ma’asit is not negative it does goes in the same direction as the negative side, being this the reason why the Arizal forbade it’s practice.

The Holy Zohar explains that the Names are combinations of the 22 Hebrew letters. In other words, the letters are the building blocks and the Holy Names are the already built structure. Most of the people do not even know the basics of the letters. Just the meditation of a single letter of the alef beit is a powerful tool for avodat Hashem. The next level is combining the letters, at this point it could get dangerous. A person needs to be well versed in Kabbalah so that a bad energy is not activated by a wrong meditation.

An exercise recommended by Rabbi Shepherd is to meditate on all of the letters one by one. So to meditate from א to ת and then from ת to א. Once this is achieved, meditate combining a letter with all of the letters: אג אב אא.. and so on. This already a high level; but, when adding a third or fourth letter we are talking about very advanced levels. The task is to learn the meaning of the letters by themselves. Then to learn the meaning of combined letters so that the person will know when, when and how to use these powerful tools.