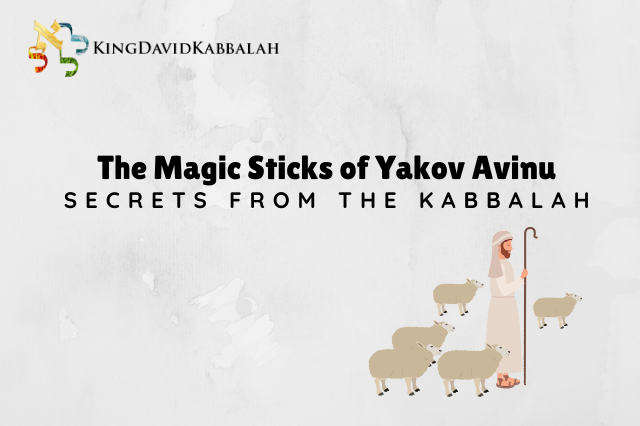 The Magic Sticks of Yakov Avinu

In Parashat Vayeitze there is an episode of a dispute between Yakov Avinu and Lavan about Yakov’s share. Yakov came up with a proposal that certain type of sheep would be for him and the other for Lavan.  The deal in more details is as follows:

“let me pass through your whole flock today, removing from there every speckled and spotted animal—every dark-colored sheep and every spotted and speckled goat. Such shall be my wages.”

Further in the Parasha it explains how Yakov manage to multiply his flock over Lavan’s:

“Jacob then got fresh shoots of poplar, and of almond and plane, and peeled white stripes in them, laying bare the white of the shoots. The rods that he had peeled he set up in front of the goats, in the troughs, the water receptacles, that the goats came to drink from. Their mating occurred when they came to drink, and since the goats mated by the rods, the goats brought forth streaked, speckled, and spotted young. But Jacob dealt separately with the sheep; he made these animals face the streaked or wholly dark-colored animals in Laban’s flock. And so he produced special flocks for himself, which he did not put with Laban’s flocks.” (Genesis 30:38-40)*

The Arizal explains that it can be learned from the sheep that were focused on the sticks Yakov made, how it affected the genetics of their kids. The same way occurs by humans, at the moment of cohabitate with the spouse, both need to be concentrated on each other and on the moment they are experiencing.
There is a story brought by the Sages:

” There was one time when there were a light skinned king and queen, they lived together and the baby they conceived was dark skinned. the king was sure his wife was cheating on him, so he went to ask a sage of his trust. The sage asked the king if in his chamber there were statues or images of dark skinned men, to what the king answered positively. The sage explained that the power of the mind and thoughts at the moment of procreating is so powerful that ir can visibly affect the conceivement of the baby. ”

The Arizal explains that the moment of conceivement is one of the holiest moments a person experiences, so the intentions (kavanot) and thoughts should be focused on holy things. **

Another interesting point is the secret behind the description of the sheep. The term Akudim that can be translated at bands (describing the sheep born with bands around the ancles) represent the world of Akudim, in this world the light is grouped in one vessel so it is impossible to distinguish what it contains.  The next allusion are the small speckles (Nekudim), in this world happens the event know as the shattered of the vessels and at a level where the sefirot are visible. Finally the third level are the large splotches referring to the world of Brudim, at this world the dots are extended forming lines, giving birth to what is known as Partzufim. The Partzufim are the world of Tikun, at this level is where Avodat Hashem takes place.

In sum, the episode about Yakov Avinu , Lavan and the flock is describing three level of existence; the highest where all is united into one, the second where the shattering of the vessels takes place and the third one the tikun. These three stages are not historical events in the history of the creation it is also related to the human being, where the man jumps from one another though the different stages of life. Hashem gives men the opportunity to men to create the vessel that would contain the light of Hashem.

**To know more about this topic visit the youtube channel: https://www.youtube.com/c/KingDavidKabbalah