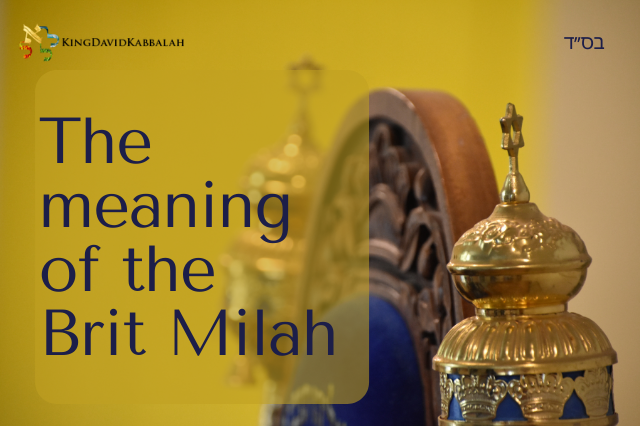 The meaning of the Brit Milah

The Zohar in parashat Vaera explains the secret behind the Brit Milah (circumcision). The concept of brit milah is also related to the period of time known as Shovavim* because the brit milah consists of taking away the negative part of the males reproductive organ. Also Shovavim is about the removal of negativity that has to do with the reproduction organ. The Zohar mentions that also Ishmael (the Arabic world) do circumcision. The questions asked is that since Ishmael does do circumcision do they have a portion in the world to come? To what Hashem answers that yes,  they have a certain portion in the lower realms. And this is the connection that the arabs have to Eretz Israel.

Due to the merit of the brit milah that Ishmael has, they have an attached connection with the holy land. Therefore, when the Jewish people is not acting accordingly and lose control of Eretz Israel, by default the control goes to Ishmael. The Zohar continues with the prophecy that it will be various wars between the children of Ishmael vs the children of Edom(represented by the western society of nowadays). It can be observed nowadays that there are many conflicts between the Muslim world and the christian world, but the core of the conflict is Jerusalem, the Holy Land. The Zohar prophesy that there will be different wars: one by the ocean, one by the land and a third one near Jerusalem. The fight will be for the control of the Holy land, but the control will not be given to either. Instead the Zohar affirms that there will be a different nation from the end of the world (presumably China) that will overcome Rome (representation of the western society and Edom). This world will last 3 months and many nations will be involved until all the children from Edom will gather from all of the corners of the Earth.

At the midst of this war there will be revelation from Hashem fulfilling the meaning of the verse:

For the LORD holds a sacrifice in Bozrah (Isaiah 34:6)

At the end of this happening, the Zohar continues, Hashem will shake the Earth (presumably earthquakes) ending the mandate of the children of Ishmael. The rest of the armies of the world will eventually loose their power. the only nation that will out stand will be the Jewish Nation. Even though the previously mentioned wars sound as a scary occurrence, the Zohar shows a silver lining. All these events will be for the revelation of the protection that Hashem has towards His people, as the verse states:

This refers to the protection that Hashem is providing His nation. The right hand is an allusion to the Torah. Therefore the whole redemption is depending on the Torah. The more a person is stronger and closer to the Torah the more protected from above he will be to face these events. After all these catastrophic events, the Zohar concludes, that Hashem will turn to the nations with a clear language. Everyone will call Hashem’s name and worship Him in unity. This will be the end of times as the verse states:

And the LORD shall be king over all the earth; in that day there shall be one LORD with one name.
(Zechariah 14:9)

**All of the texts were take out form sefaria.org