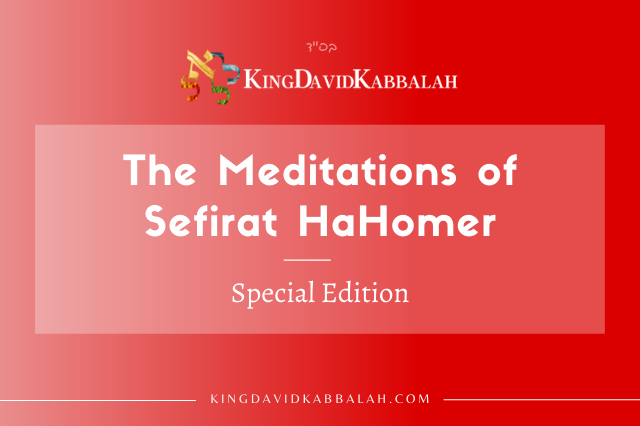 On the second day of Pesach the Jewish people start Sefirat HaOmer (The counting of the Omer) that goes all the way to Shavuot. One of the simple explanations say that people should take advantage of these days to apply one of the forty eight ways of acquiring the Torah each day. At a deeper level the counting of the Omer  is very significant in the kabbalistic meditation world. The Arizal taught three main meditations to done during this time:

1.- Absorption of the blood

2.- Bring abundance into the Sefirot

It is known that when Adama HaRishon committed the sin many of the spiritual structures got damage. One of the jewish kabbalistic principles is that anything related to judaism is an opportunity to do a “tikun” for the sin of Adam HaRishon. When Adam sinned the nai of ABA was blemished; therefore it was removed from the nai of IMA.  In consequence the nai of IMA became a ribua:  אאהאהיאהיה which has the same gematria of “dam (blood)” that is 44. So, the meditation of “absorbing the blood” consists in bringing back the nai of ABA (י–ה–ו–ה) into the ribua of Ekie. Through the nai of ABA, the nai of IMA will be turned straight into א–ה–י–ה; without ribua. This meditation is should be done every day, of the counting of the Omer, to the Sefira that applies to each day.

The third meditation deals with the 320 judgements. These judgements come down through the sparks liberated by the insertion of Gevura of Atik into the Chesed of Arich. The connection of the left pillar with the right pillar provoque these judgements to be active. The connotation of the judgements being active is not a negative one, rather it is an opportunity given to make a tikun.  When the Gevura of Atik interacts with the Chesed of Arich in expels sparks that are turned into the 32 paths of wisdom and 50 gates of Bina. These two concepts are the “spiritual materialization” of the judgements that came down. The Arizal explains that these judgments are one of the causes of the breaking of the vessels. He who is wise should understand what has just been explained.

Each week there are 320 judgements that need to be sweeten, so each day there is a work of 45 judgments that need to be sweeten. And in the last day, of the counting of the Omer,  5 more are added to complete the 320. The Arizal mentions that when the meditation is done one should be aware of the gate through which his soul came into this world and include it as part of the meditation. Today, the reality is that this knowledge is out of the capabilities of a regular man. What is done instead, is what is brought down in “The Gates of Kavanot”. the reduction of the 50 possible gates into 6 gates.