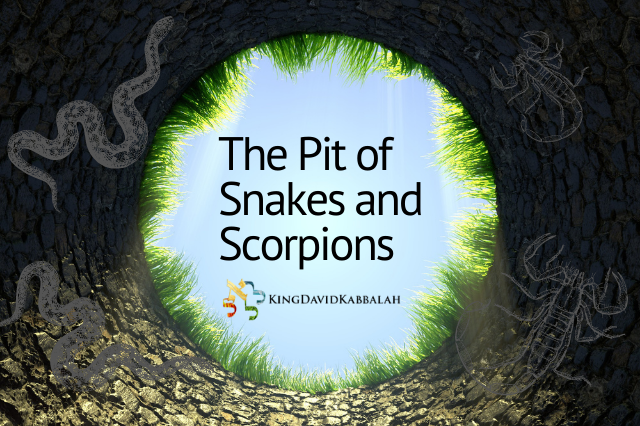 The Pit of Snakes and Scorpions

In Parashat Vayeshev one of the most famous events occurred, the brothers of Yosef threw him into a pit and sold him as a slave, as the Torah says:

and later It states:

Come, let us sell him to the Ishmaelites, but let us not do away with him ourselves. After all, he is our brother, our own flesh.” His brothers agreed. (Genesis 37:27)*

The pit was empty of water, Rashi explains that it was filled with snakes and scorpions, when snakes and/or scorpions are mentioned it is a hint to a big cabalistic concept. To understand this concept, the meaning of water has to be understood. It is known that the water always refers to Torah, the simple understanding is that if man does not attaches himself to Torah, by definition, his life is going to be filled with snakes and scorpions.

In a deeper understanding, the Rashash explains that the Torah is the pilar of light that comes in to the creation; to the space that was created by the contraction** called kav (pilar of light). All the creation is having is sustenance and connection with the creator through “the kav”. Since the “Kav” is a very abstract concept, it is hard for people to have a tangible idea of it, the way of the kabbalists is to work on their emunah on these matters so that Hashem can reward them with the understanding of these matters.

It has been established that the Torah is the pilar and sustenance for the creation, when it says that the pit was empty (without water), how could it be, that something even exists without Torah? In a more profound way it can be asked, from where the negative side obtains its sustenance? The kabbalah explains that the negative side receives from (as if)* the back of Hashem, so the livelihood for those energies is very low.

The goal is to receive the light like Moshe Rabenu, from mouth to mouth with Hashem. As it is written:

With him I speak mouth to mouth, plainly and not in riddles, and he beholds the likeness of the LORD. (Numbers 12:8)*

When a person is facing Hashem by living life according to Torah, the person will be able to connect with Hashem in a the highest of levels, when this is accomplished all of the negativity is removed from oneself making it to be a life of closeness with the creator.

* All sources obtained through: sefaria.org
** Tzimtzum: Kabbalistic term for the process of contraction of the Ein Sof so that it would be a space for creation to exist.